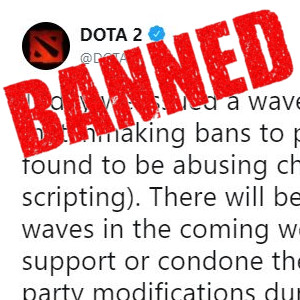 Yesterday (04/04/2018) almost at midnight in the tweeter was reported on a new wave of bans for cheats in the game Dota 2.

Today we issued a wave of permanent matchmaking bans to players who were found to be abusing cheats (e.g. auto-hex scripting). There will be subsequent ban waves in the coming weeks. We do not support or condone the use of any third-party modifications during matchmade games.

It's very interesting whether this is connected with Valve's application of using artificial intelligence against cheaters. Unfortunately we do not have this information.